Patent Cover Sheet – How Do You Read It?

Patent Cover Sheet. Before you read the patent specification, the patent claims, and review the patent drawings, you are confronted with the cover sheet. How do you read it?

A patent is made up of several parts. The detailed main body of the patent is the patent specification. It describes the invention - how to make it and how to use it. It is used in conjunction with the patent drawings to help in that description.

But what about that first page - the patent cover sheet.

If you seldom pick up patents to read them the cover sheet may seem incomprehensible. But it does have much useful information - if you can sort it out.

Below is the top portion of a U.S. Patent. Across the top you will see the description United States Patent followed by the patent number - in this case 7,206,256 B1 and the date of issue is immediately below that. 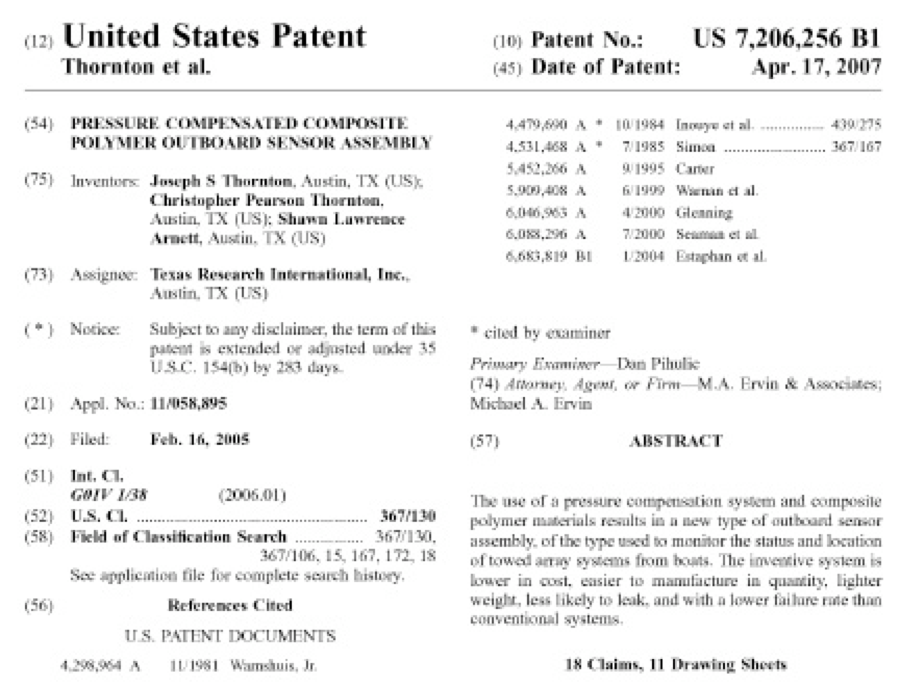 What does that B2 mean - that this is an issued patent. An application that has not yet issued normally ends with an A, not a B. The number for a utility patent has seven digits, like this one does. A design patent number has 6 digits preceded by a capital “D”, such as D142,511. A reissue patent - that has been corrected by the issuance of a new patent - has a five digit number preceded by “RE”. A reexamination certificate (a patent that had been reexamined because of newly discovered prior art) has a seven digit number preceded by “B1" (or “B2" or “B3", to designate if this was the first,second, or third reexamination), for example B1 5,123,456.

Let's talk some more about that issue date. This is the date that the patent issued and the date from which the patent is in force until it expires. When that expiration date is has become a complicated subject that will be covered in another article soon. Before June 8, 1995 all U.S. patents expired 17 years from the issue date. But that changed when US patent law changed to achieve more harmony with international law. Now the basic calculation is 20 years from the filing date. But there are so many exceptions that as I said - I will cover that in another article.

The next thing you may notice on the patent cover sheet is the peculiar set of numbers all over the cover sheet before each of the individual items of information. Example - (10) Patent No. or (75) Inventors. By international agreement, these numbers are used consistently by all countries on their patent cover sheets. So if you pick up any patent in a language you cannot read, let's say a German patent - you will still know that (21) is the original application number. This assures that certain information about the patent will be available to everyone, even without the ability to read the language of the patent. Of course you must know the numbering system - but I keep a little list of the numbers and their meaning around because I often have to examine foreign language patents for things like their filing date or assignees.

Now let's talk about some of the individual items on the patent cover sheet. I will skip the ones that are rather self-evident. First is (75) Inventors. The names and hometowns of all inventors of the patented invention are listed. In the United States, patent applications are filed in the name of the inventors. In other countries, the owner (assignee) of an invention may file a patent application in his or her own name, even if he or she is not the inventor.

Next is (73) Assignee. This is the name of the person or entity to which the ownership of the invention has been assigned, most commonly the company that the inventor works for. If the patent has not been assigned, the Assignee field will be absent. In order to have an assignee listed on a patent cover page, the assignment from the inventor to the assignee must be recorded with the Patent Office.

Note the next line on the patent cover sheet has a ( * ) Notice: This is a notice that the term of the patent has been extended by 283 days. For this particular patent the term would have ended 20 years from the filing date of Feb 16, 2005, but because the patent office took too long to complete the prosecution they have granted an addition 283 days. In these days of long delays in the patent office this number can end up being quite large.

Now for (22) Filed. This is the date that the application was filed in the U.S. Patent Office.

And There is More on the Patent Cover Sheet

The next three items are (51) Int. Cl., (52)U.S. Cl., and (58) Field of Search. These are the International and U.S. classifications that are related to the field of the invention and the fields that the examiner searched in examining the patent application. Information regarding the classification system can be found here. The classification information is useful when searching for relevant prior art, such as to try to invalidate a patent or to help in drafting a patent application in a field similar to this patent.

The next item is (56) References Cited. This is a listing of all of the publications that were considered by the examiner in deciding whether to grant the patent. Listed in this example are U.S. Patents, for which the patent number, issue date, inventor, and U.S. classification are listed. This is sometimes followed by Foreign Patent Documents, which may include patents and published patent applications. Finally, Other Publications, typically scientific articles, are sometimes listed. The listing of cited references on a patent cover sheet is very important because there is a strong legal presumption that the patent cannot be invalidated based upon what is disclosed in the cited references.

Next, the Patent Examiners are listed, followed by the name of the patent attorney and/or the patent law firm that prosecuted the application. The next item is [57] Abstract. This is a short description of the invention and is similar to the abstract of a scientific article. It permits searching of the subject matter of the patent.

Following the Abstract is a single line that indicates the number of claims in the patent and how many Drawing Sheets it contains.

The final item on the patent cover sheet (not shown here)is a drawing of the patent as representative of the invention.

Probably more than you wanted to know - but you can refer to this article if any part of the patent cover sheet confuses.