How to Get a Patent

In describing how to get a patent it is sometimes,  useful to show it a a process flow chart. Lets' do that here. First - understand - it is not nearly as simple as shown here. Their are many sub-steps not shown as well as many things that can happen between the practitioner and the examiner that might change the actual flow considerably.

But it is still useful to look at a simplified patent flow chart. Here is one: 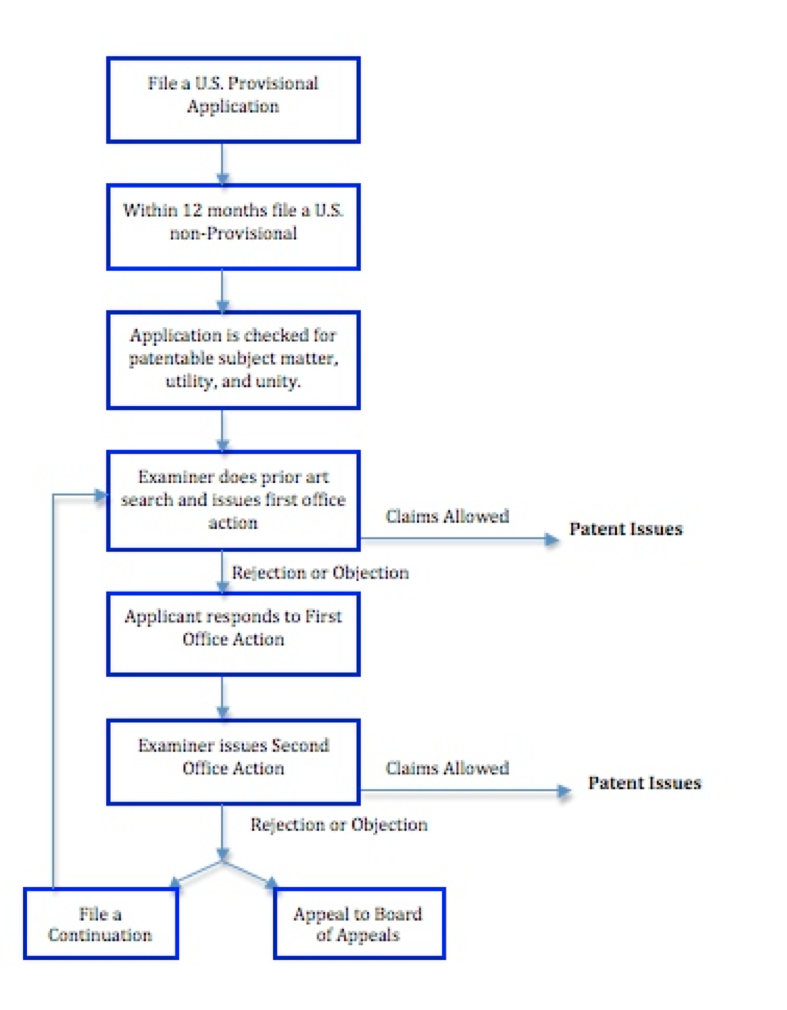 We show a beginning step of filing a provisional. Many times that is not the first step but we want to illustrate that it is a possibility and to show that the provisional lies outside most of the activity of the US Patent Office. An examiner never examines a provisional unless a non-provisional is submitted that claims the priority of that provisional.

Basically the applicant normally gets two bites of the apple. Once the examiner receives the application and does a prior art study a First Office Action is communicated. If that action is an allowance then the patent proceeds to issuance. If not (usually not) there is a rejection of the claims or possibly an objection to some aspect of the claims, written description, or drawings.

The applicant then usually has a total of 6 months to respond, although only the first three months are free. The applicant response is to disagree with the examiner (a traverse) or to amend the claims or specification to overcome the rejection or objection.

It is now the examiners turn again and he/she can either allow or reject again - this is usually referred to as the final. Although it is important to understand that seldom is anything final in the US Patent Office. All you have to do is spend a little money and you can be back in business for more fights with the office. Some of your options are to file some kind of continuation and basically get two more bites of the apple, or file an appeal, or just give up and let the application go abandoned (not shown). I will talk about appeals and continuations in other articles.

The options after a second rejection are over-simplified in the patent flow chart. Sometimes an examiner will reject the claims at this point but in the text will point out actions that could achieve allowance. The applicant can then respond quickly with an amendment after final rejection and achieve allowance.

And there are other places in the flow in which other things can happen. But we are trying to show the more typical activities.

What About the Timing of How to Get a Patent?

Once a non-provisional patent application is filed you may not see a first office action for 12 - 20 months. Sometimes longer. The timing is highly dependent on the art unit to which your application is assigned. Some art units are simply buried in a backlog of applications. Then you could still be facing another 12 to 18 months of time dealing with the office actions.